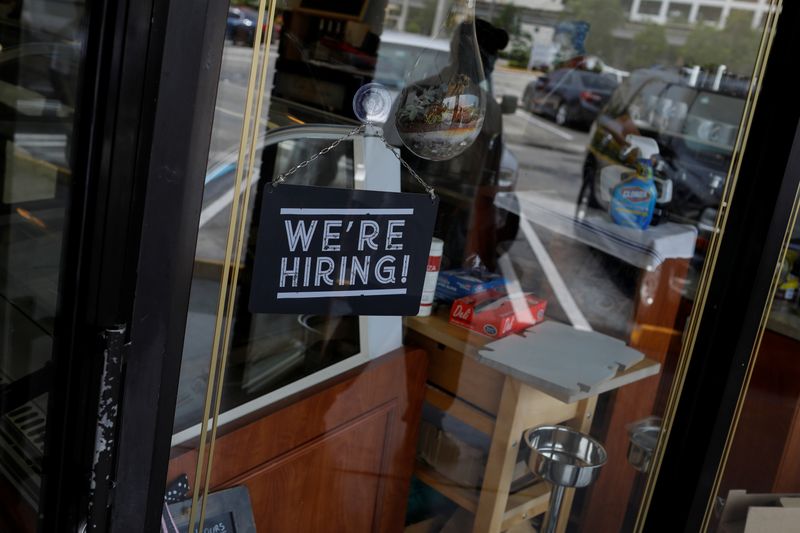 © Reuters. Miami-Dade County eases some of the lockdown measures put in place during the coronavirus disease outbreak

WASHINGTON (Reuters) – U.S. private employers stepped up hiring in September, but diminishing government financial assistance and a resurgence in new COVID-19 cases in some parts of the country could slow the labor market’s recovery from the pandemic.

Other data on Wednesday confirmed that the economy suffered its sharpest contraction in at least 73 years in the second quarter because of the disruptions from the coronavirus. Record growth is predicted in the third quarter, buoyed by fiscal stimulus and the resumption of many business operations.

But without another rescue package, rising coronavirus infections and political uncertainty that could extend beyond the Nov. 3 presidential election, gross domestic product estimates for the fourth quarter are being slashed.

Private payrolls increased by 749,000 jobs this month after rising 481,000 in August, the ADP National Employment Report showed. Economists polled by Reuters had forecast private payrolls would rise by 650,000 in September. Employment gains were spread across all industries and company size.

Manufacturing payrolls increased by 130,000 jobs and employment at construction sites rose 60,000. Hiring in the services industries advanced 552,000, with trade, transportation and utilities leading the gains.

The ADP report is jointly developed with Moody’s (NYSE:) Analytics. Though it has fallen short of the government’s private payrolls count since May because of methodology differences, it is still watched for clues on the labor market’s health.

The ADP report is based on active and paid employees on company payrolls. The Labor Department’s Bureau of Labor Statistics (BLS) counts workers as employed if they received a paycheck during the week that includes the 12th of the month.

When businesses were shuttered in mid-March, millions of workers were either laid off or furloughed. Economists say the return of furloughed workers when most businesses reopened in May boosted the payrolls numbers reported by the government.

New weekly applications for jobless aid have stalled at higher levels after dropping below 1 million in August as the government changed the way it strips seasonal fluctuations from the data. Data from Homebase, a payroll scheduling and tracking company, showed fewer employees at work in September relative to August.

New daily COVID-19 cases started spiking last week for the first time in eight weeks. Infections are expected to rise in the fall, which economists believe will lead to some restrictions being imposed on businesses in the services sector.

Stocks on Wall Street were higher. The dollar declined against a basket of currencies. U.S. Treasury prices fell.

“The big gains from business re-openings are fading,” said Gus Faucher, chief economist at PNC Financial (NYSE:) in Pittsburgh, Pennsylvania. “Job growth will slow through the rest of 2020 and in 2021.”

The government is scheduled to publish its closely followed employment report, which includes public workers, on Friday.

According to a Reuters survey of economists, private payrolls probably increased by 850,000 jobs in September after rising 1.027 million in August.

With government employment expected to be held back by the departure of some temporary workers hired for the 2020 Census and coronavirus-related budget challenges at state and local governments, nonfarm payrolls are forecast advancing by 850,000 in September after increasing 1.371 million in August.

That would leave employment 10.7 million below its level in February. Employment growth peaked in June when payrolls jumped by a record 4.781 million jobs.

In a separate report on Wednesday, the Commerce Department said GDP plunged at a 31.4% annualized rate last quarter, the deepest drop in output since the government started keeping records in 1947. That was revised up from the 31.7% pace reported last month and reflected a less sharp collapse in consumer spending than initially estimated.

The government also published data on contributions to GDP by industry, which underscored the havoc wreaked by the virus.

Private goods-producing industries contracted at a 34.4% rate, while services tumbled at a 33.1% pace, and government decreased at a rate of 16.6%.

The average of GDP and GDI, also referred to as gross domestic output and considered a better measure of economic activity, decreased at a 32.5% rate last quarter. That was revised from the 32.4% rate estimated last month.

Third-quarter GDP growth estimates are topping a 32% rate as evidenced by a strong housing market and turnaround in business investment.

Growth estimates for the October-December quarter have been lowered to around a 2.5% rate from above a 10% pace.