Apple unveiled its newest flagship devices today, the iPhone(s) 12. You can follow the entire announcement over at The Verge (or the tech blog of your choice).

The iPhone 12 represents Apple’s first major foray into 5G cellular technologies. Verizon CEO Hans Vestberg was on hand during the event to announce the nationwide launch of the carrier’s sub-6 5G network. Apple says it has designed the iPhone 12 lineup to achieve ideal network performance while balancing battery life. A “smart data mode” uses LTE when your current activity doesn’t demand 5G speeds. Apple says it has tested 5G performance with 100 carriers across 30 countries to ensure a smooth launch.

Apple isn’t the first company to release a 5G phone, of course, but market uptake has been relatively slow. It’s growing, though: In January, 3% of phones sold in the U.S. had 5G; by August, that was up to 14%.

But nothing will do more to increase that share than a 5G iPhone; about half of the phones in Americans’ pockets have Apple logos on the back. 5G devices are projected to make up about 48% of phones in North America by 2025, more than Europe (34%) or worldwide (20%). 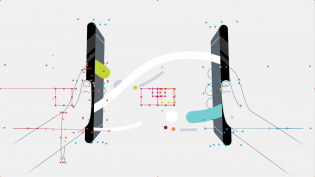 What does 5G do? It makes data a lot faster. What does that do for journalism? Last year, I sketched out some of the possibilities.

Things that are possible but suboptimal on middling connections now — say, livestreamed video — should become much more reliable.

Things that are on the edge of possibility now — like decent-quality AR and VR — should become much more mainstream.

And there can just be…more, of everything. An AR experience that today places an object into 3D space might be able to handle an entire roomful of objects tomorrow. One live video stream going to a device might become three or four simultaneous streams, with users able to move seamlessly between them without a stutter or glitch and with less compression required all around.

On the flip side, things that have justified primarily because they improve end-user performance will become less appealing over time. Publishers have adopted Google’s AMP at a large scale because it offers much faster speeds for users on mobile. Don’t misinterpret this as blasphemy against the webperf gods — but as data gets faster, the reasons to accept the tradeoff of AMP’s flaws get weaker. (Just as things like web fonts, background video, and larger images are all more acceptable today than they were a decade ago.)

It’s all interesting stuff! But let’s be realistic: The apps that benefit most from 5G won’t be the ones from news publishers. They’ll be the other apps competing for our audiences’ attention: games, entertainment, and other new data-heavy ideas that haven’t been thought of yet.