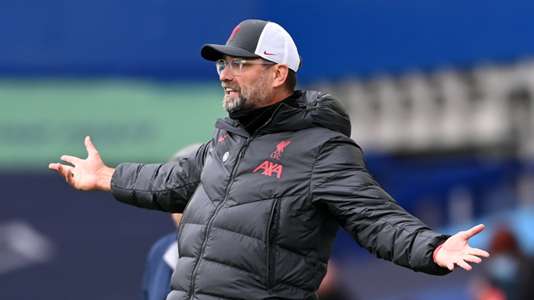 The Reds boss thought his side had snatched a late winner at Goodison Park, but technology intervened in controversial fashion

Liverpool boss Jurgen Klopp says he “didn’t see offside” as VAR chalked off what would have been a late winner for Jordan Henderson in their Merseyside derby draw with Everton.

The Reds thought they had snatched all three points in a dramatic contest at Goodison Park.

Sadio Mane’s fastest goal for the Reds in a Premier League derby and Mohamed Salah’s 100th goal for the club had the reigning champions in front on two occasions. They were pegged back by the hosts, with Carlo Ancelotti’s side refusing to roll over even after seeing Richarlison sent off.

It looked as though Everton had fallen at the final hurdle in stoppage-time, as Henderson turned home a Sadio Mane cross, but the review process deemed that the Senegal international had strayed fractionally offside before teeing up his captain.

That call drew a bemused response from those watching on, with Klopp also unable to explain how those involved came to such a contentious decision.

He told BT Sport afterwards: “For Henderson’s goal I didn’t see offside – but it is because someone decided it.”

VAR also did Liverpool few favours when ruling that Virgil van Dijk had strayed beyond the last man in the first half before he was clattered by Everton goalkeeper Jordan Pickford – who escaped any punishment despite forcing a Dutch defender from the field.

The German could have been forgiven for feeling downbeat at the full-time whistle, after losing a talismanic figure to injury and missing out on a morale-boosting win, but he is eager to take the positives from another eventful derby.

He said: “The performance was top, it was a top game and a good game for both teams. We were dominant against a side full of confidence and with a clear plan. It was probably the best away game since I was at Liverpool.

“I saw a really good performance. I would be more happy if we win but I wanted to see a response and see the team we were before.

“The game was brilliant but it’s over, we got one point and that’s the situation. The game was good, I loved it in so many moments how we played against such a good side.”