More Republican households watched this year’s presidential debates than Democratic ones, but the Republican watchers were slightly likelier to turn them off earlier in the night.

And during the so-called dueling town halls by President Trump and Joe Biden, Democratic and Republican households mostly watched the town hall of their own party, according to 605, a television viewership analytics firm. 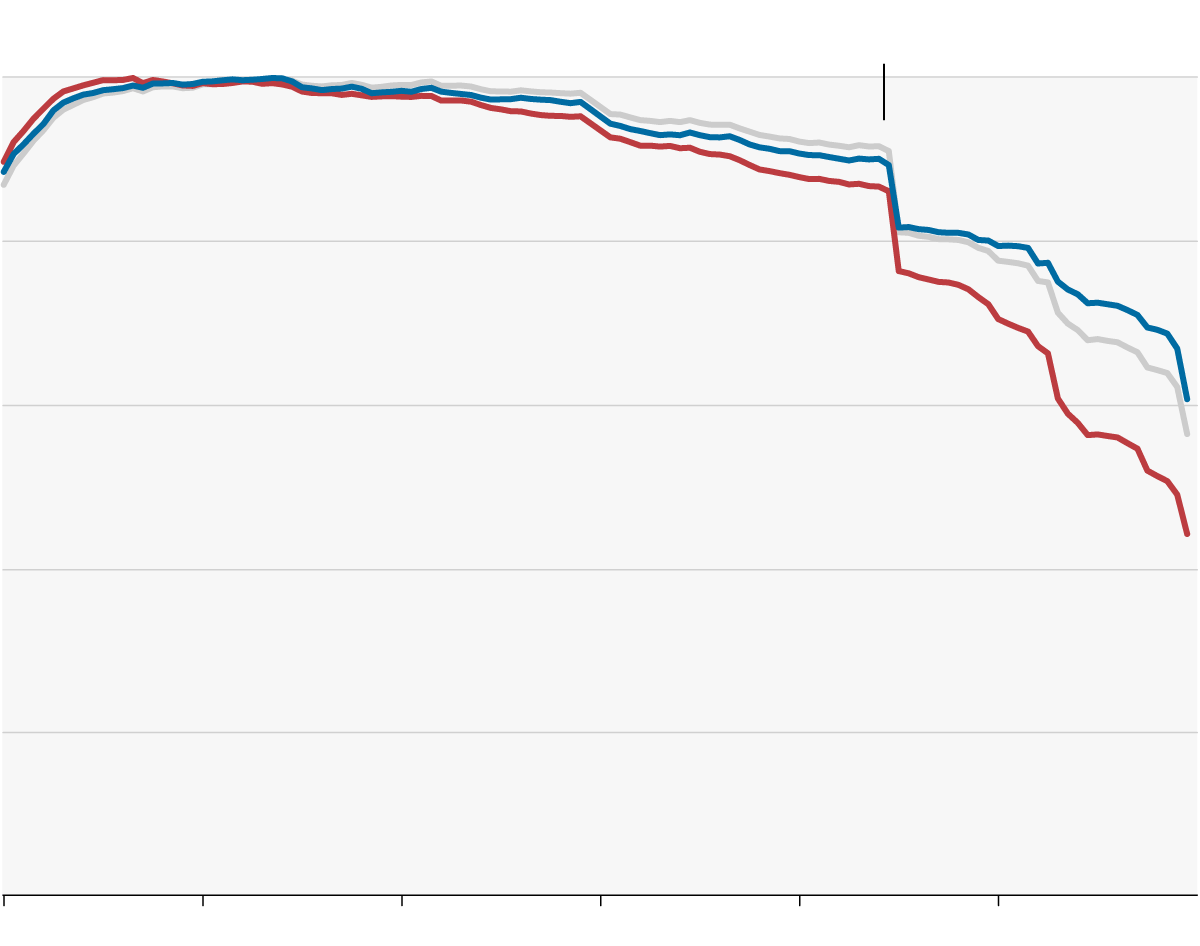 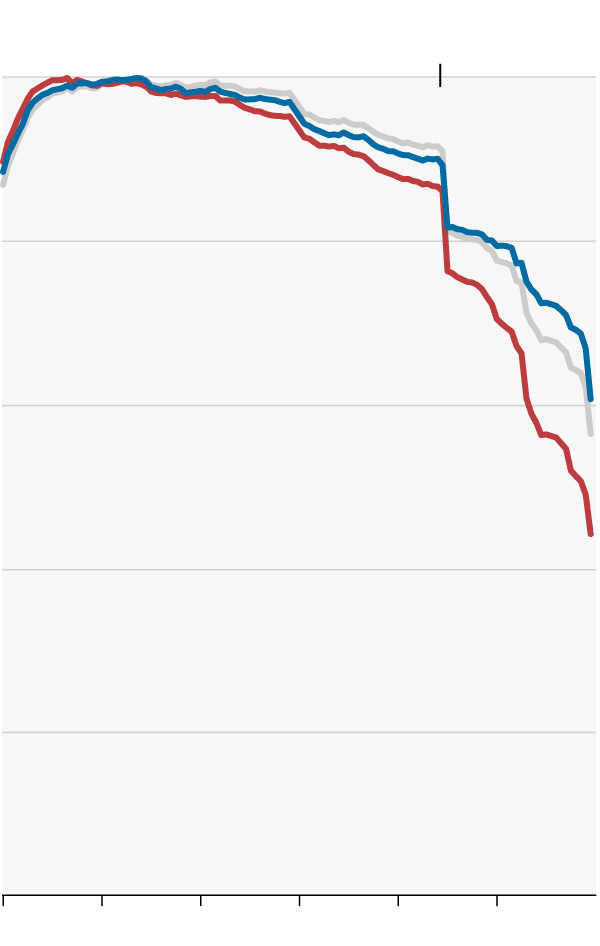 At the request of The New York Times, analysts at 605 used detailed, anonymized viewership data from more than 22 million households, linked to anonymized voter registration records, to reveal Americans’ debate viewing patterns with a degree of precision rarely seen by the public.

The data from 605 indicates that more Republicans than Democrats watched the first debate, but that relative to their peak viewership, Republican households tuned out sooner than Democrats, especially in the post-debate period.

This data describes viewership patterns among households with televisions, including smart TVs and those who watch via TV streaming and cable. It does not include streaming on laptops or mobile devices.

Republicans might have been more likely to tune into local news or another program instead of watching post-debate coverage. But it’s also possible that Republican households might have stopped watching at higher rates because they felt that their candidate was faring poorly, said Shanto Iyengar, a political science professor at Stanford who has studied mass media in democratic societies. (Mr. Trump was criticized for interrupting Mr. Biden repeatedly and lost instant-reaction polls after the debate.)

People seek out good news and avoid bad news about their preferred group or team, and if presented with information that conflicts with those preferences, it’s easier to look away than to endure it, he said. “If a team is down, 25-0, the fans of the losing team will find something else to watch,” he said. 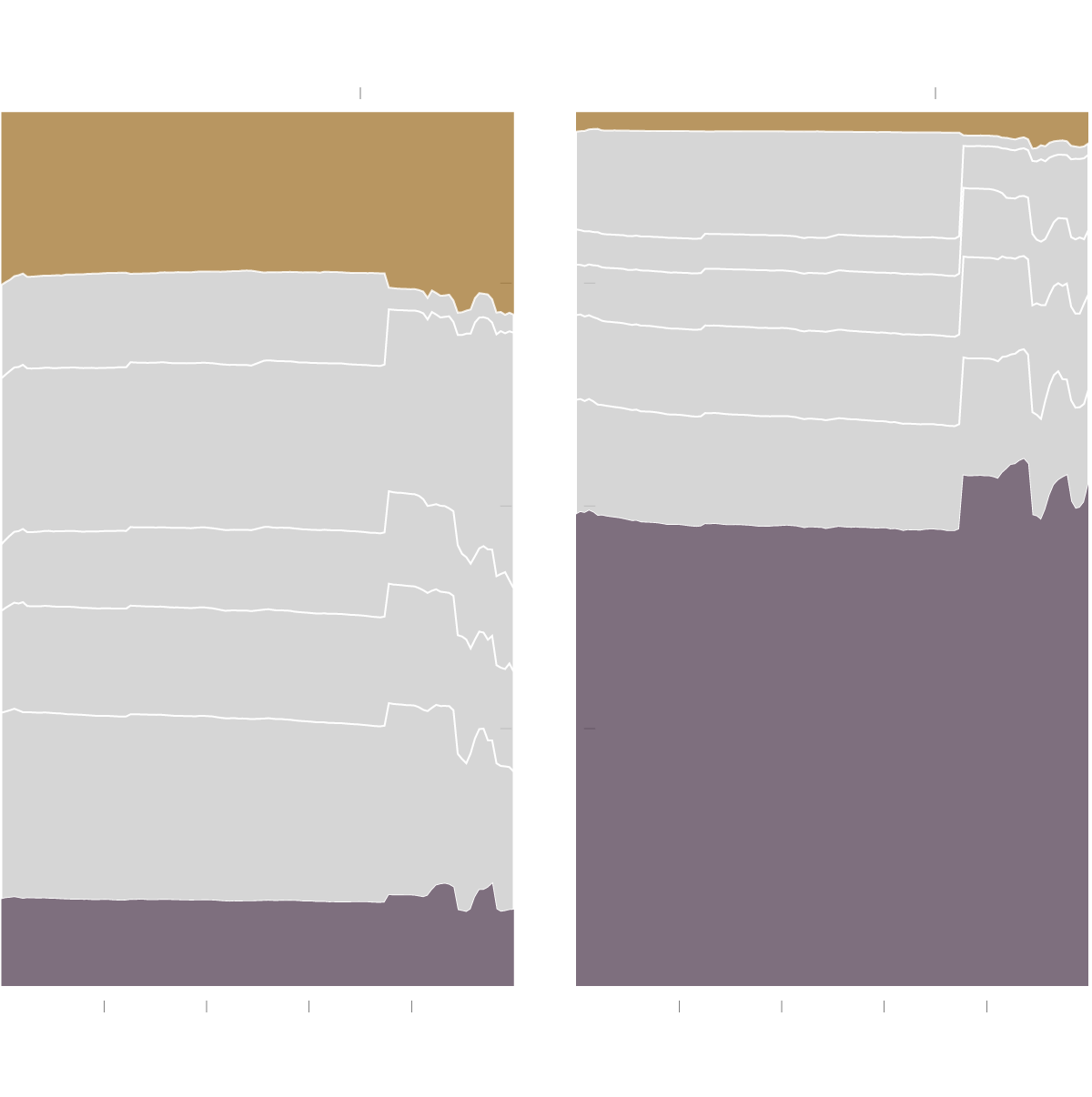 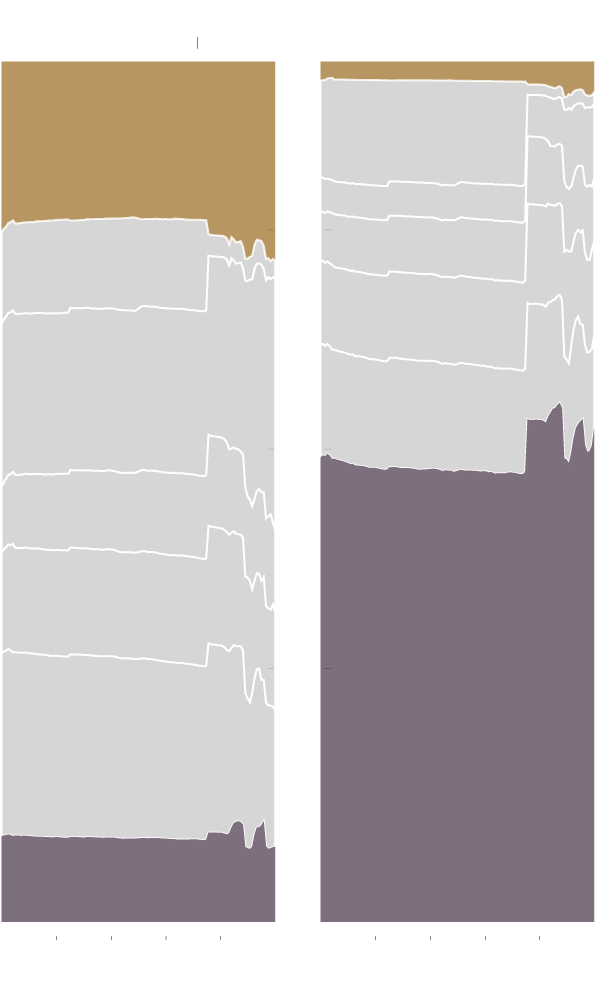 After the debate, many viewers shifted toward cable news networks like Fox News and CNN for post-debate coverage, presumably to see what other people thought about how their candidate did.

“Most people watching the debates have a hard time knowing who’s up or who’s down,” said Thomas Wood, a political science professor at Ohio State. “What we found was that it’s useful to see someone boil it down.” 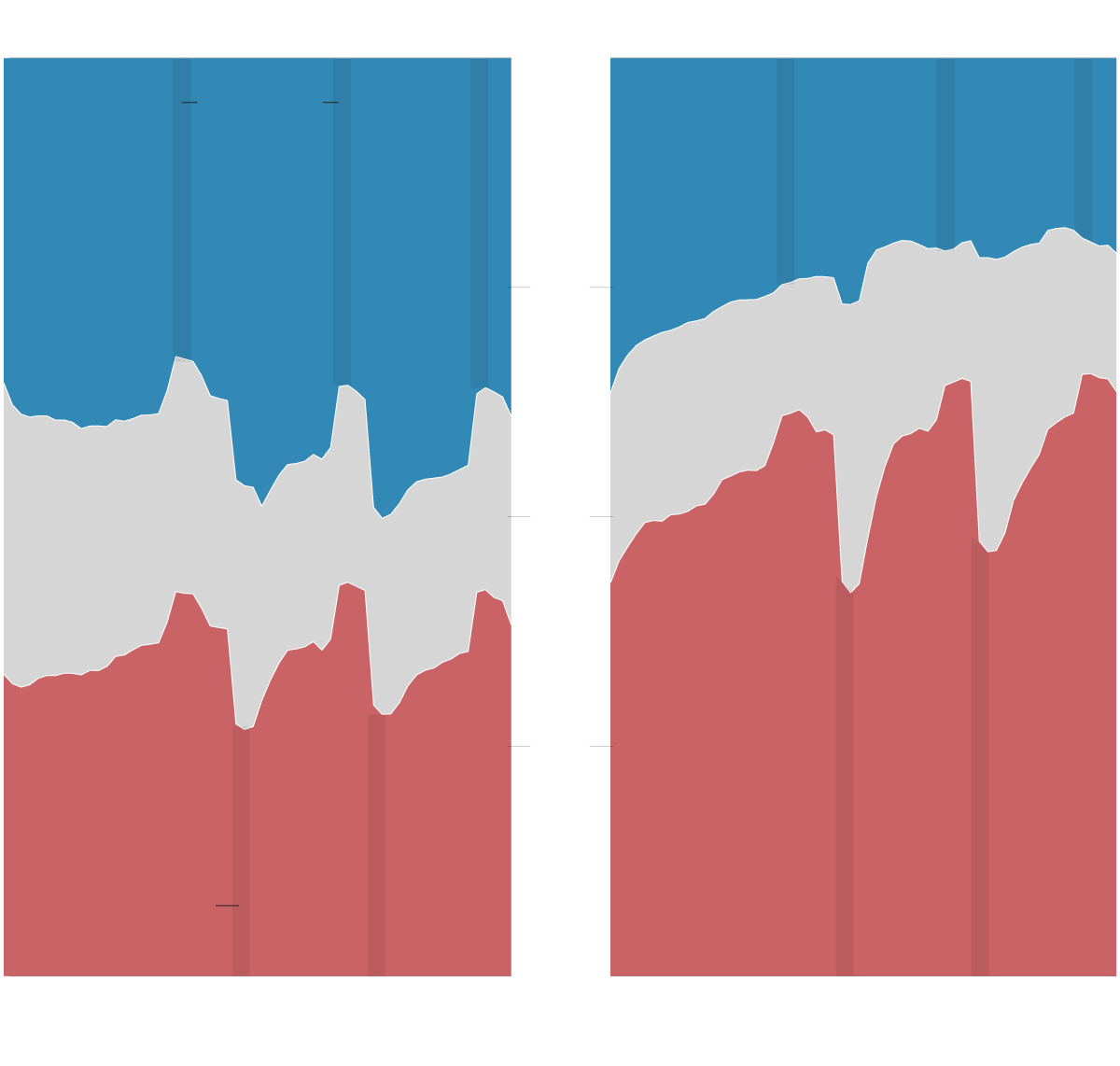 Among households that watched five minutes or more of either Mr. Trump’s or Mr. Biden’s town hall, in states with public information about voter registration.·Source: 605

The dueling town halls — the nearly simultaneous events the candidates held after Mr. Trump refused to participate in a virtual debate — presented a natural experiment in partisanship and viewership. Since Mr. Biden’s town hall was 30 minutes longer than President Trump’s, we looked only at the first hour when both town halls were aired simultaneously.

In another twist, people had limited channels to watch the town halls (ABC for Mr. Biden, and NBC and its family of channels for Mr. Trump). “For the first time in anyone’s life, they were forced to watch the debate on one network if they wanted to watch their guy,” Mr. Wood said.

The data from 605 revealed that more Democratic households — households with at least one adult who is a registered Democrat — opted to watch Mr. Biden’s town hall. And, for Republican households, the opposite was true. (Households with voters registered to different parties are not counted in this analysis.)

But that doesn’t mean viewers ignored the other party. During commercial breaks — the spikes you see punctuating the top and bottom of the charts — viewers in both parties switched channels to check out what was going on in the other town hall. But, more often than not, when the commercial was over, they switched back to their own candidate’s town hall. 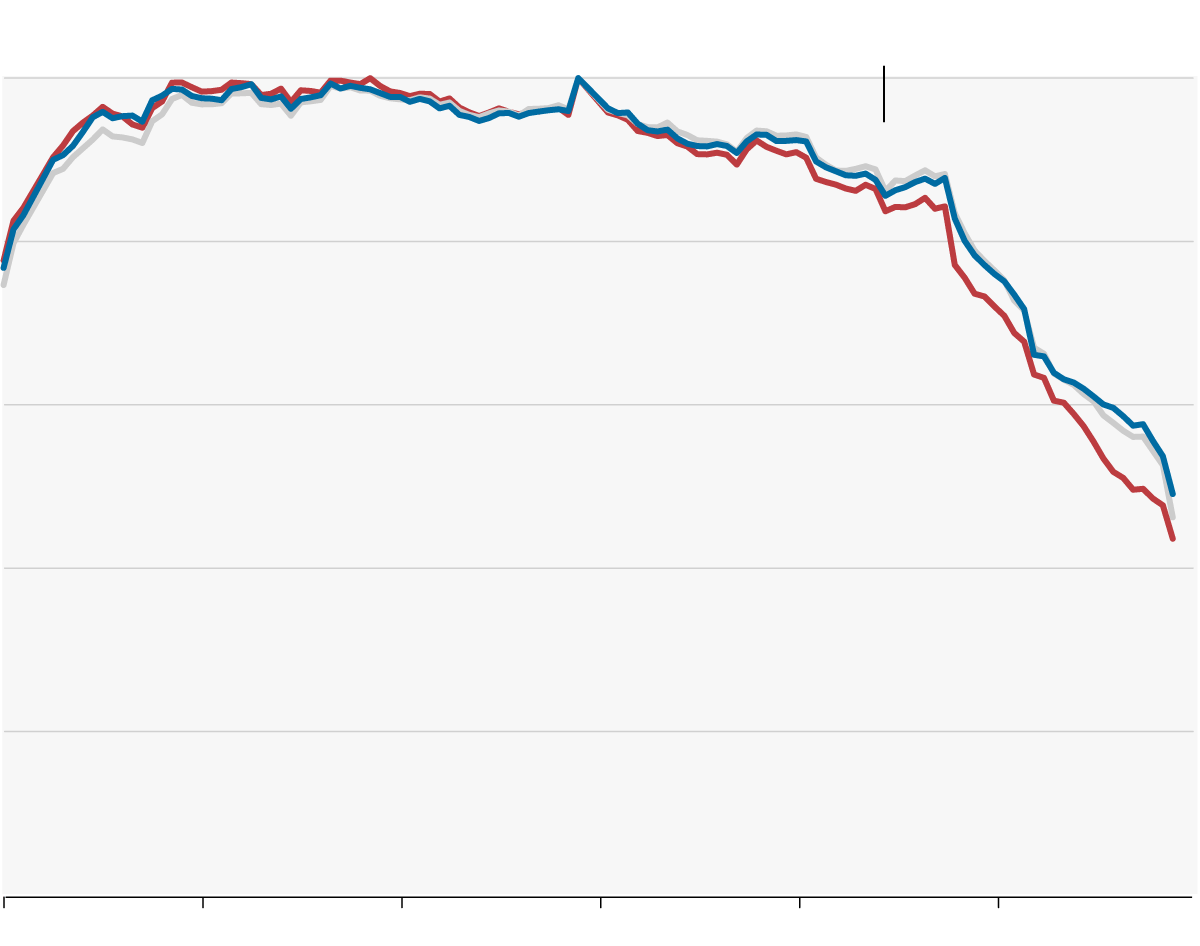 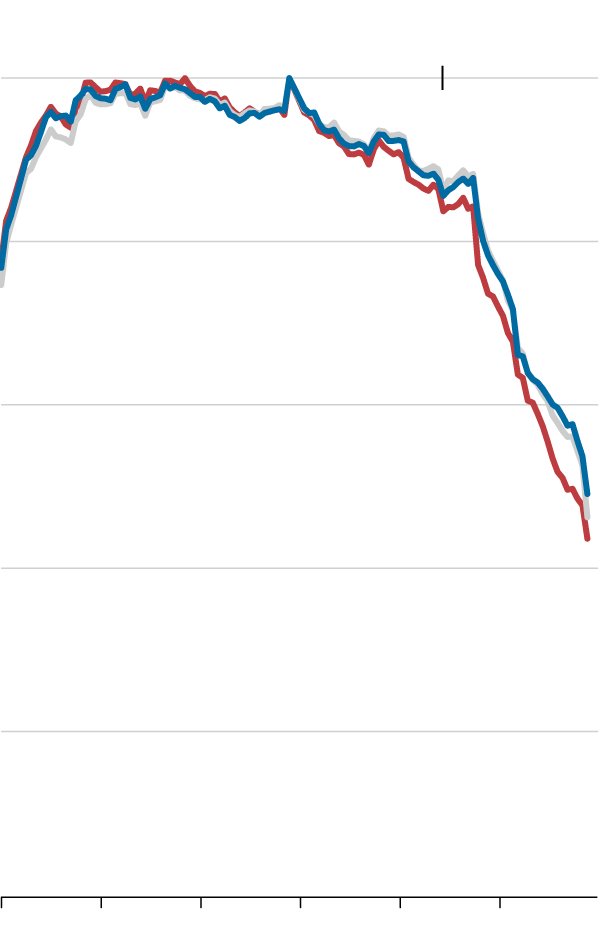 The presidential debate Thursday was calmer than the first debate, and we did not see a partisan dropoff at the same scale. In all, far fewer households of both parties watched the debate, perhaps reflecting lesser interest or stiffer competition from other programming. An N.F.L.game between the Philadelphia Eagles and the New York Giants aired around the same time.