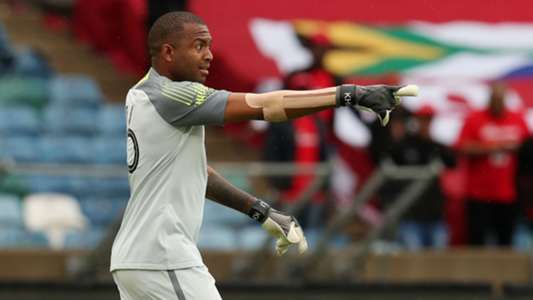 One of the main talking points from Kaizer Chiefs‘ 3-0 defeat to Mamelodi Sundowns at the FNB Stadium on Saturday afternoon was the error-riddled display of legendary goalkeeper Itumeleng Khune.

After a couple of shaky moments early in the match against Sundowns, including a goal-line clearance by Ramahlwe Mphahlele after a Khune error, the Pretoria side took the lead in the 37th minute when the former Bafana stopper missed his attempt to clear a corner, which allowed Peter Shalulile to head in.

Khune attempted to blame Themba Zwane for interference, but replays showed his was grasping at straws, which only served to further highlight the initial blunder.

For Sundowns’ third goal, Khune was also at fault after he clumsily brought down George Maluleka to concede a penalty which was converted by Zwane.

However, two former Chiefs players Jimmy Tau and Mark Williams, now working as television analysts, both had a different take on the matter, believing that Khune was let down by his defenders.

They weren’t referring to the first goal though, but rather the second and third goals – which both came after some intricate Sundowns passing coupled with excellent off-the-ball movement,

“Every time Sundowns bypasses the defence, [Khune] is the last option that Chiefs have,” Tau said during his post-match comments on SuperSport TV.  “You look at the goal that was scored by Kermit Erasmus, and then later on, the penalty – identical move [from Sundowns].

“You then have a situation where the [Sundowns] players run from the second line and they are not being tracked into the box.

“For the third goal, it was the same run which was being made [earlier for the second goal] by Zwane. In this case it was [George] Maluleka. [In terms of] tracking down players, that is where Chiefs have got it wrong,” Tau concluded, with Williams later sharing the same sentiments.

“I think Jimmy’s hitting it right on the head,” the former Wolverhampton Wanderers forward nodded.

It may be hard though to ignore some of Khune’s obvious mistakes and not to be concerned about his confidence levels, but at the same time, Sundowns did carve open the Amakhosi defence several times.

So, perhaps Tau and Williams have identified an additional problem, rather than finding an excuse for Khune’s poor performance.

These are things head coach Gavin Hunt will be pondering as the Glamour Boys line up their next matches against Chippa United in the league and Orlando Pirates in the MTN8 semi-finals.