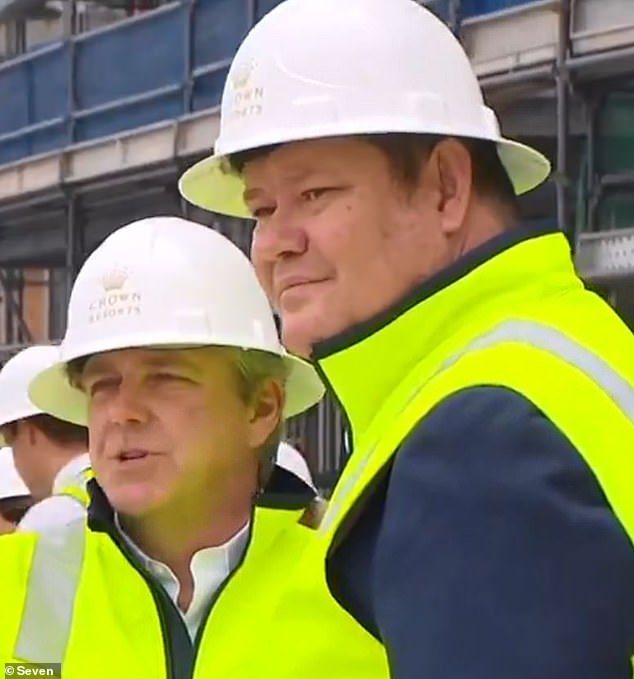 Legend has it a Texan oil magnate once challenged Kerry Packer to a game of poker at the Stratosphere Casino in Las Vegas by telling the media mogul, ‘I’m worth $60million’.

Packer is said to have looked at the oil man, pulled a coin from his pocket and said, ‘I’ll toss you for it’.

The late billionaire and gambling behemoth had long wanted to run his own a casino in Sydney but not even his money, power and connections could get the deal done.

That job was left to his only son James, who supposedly used charm over bullying in his negotiations to win the city’s second casino licence – without it even going to tender.

But he too may yet falter, just a month out from the planned opening of Crown Sydney, the city’s tallest building and Packer’s lasting family monument.

James Packer risks losing his licence to operate the Crown Sydney casino at Barangaroo on the harbourfront. The resort is due to open in December but an inquiry into Crown’s suitability to operate a casino is ongoing. Packer is pictured inspecting the Crown Sydney site in January 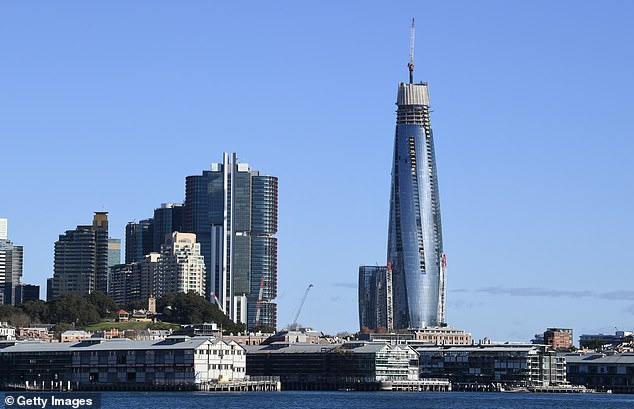 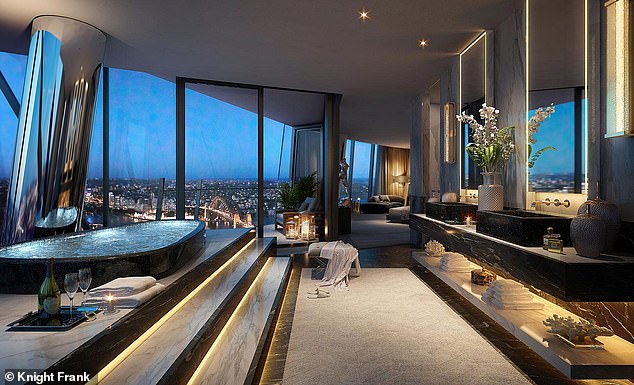 Packer junior is reportedly in no rush to take up residence in his $60million apartment across two floors of the harbourside casino and hotel.

He has no plans to even attend the scheduled opening of the almost-complete resort, despite referring to the colossus during a tour in January as his ‘passion project’.

The way things are going for Crown the long-delayed $2.2illion development at Barangaroo may still have further hurdles to clear and Packer could yet lose his casino licence.

On Wednesday, counsel assisting an Independent Liquor and Gaming Authority  inquiry into Crown submitted it was not fit to run a casino in part due to the ‘damaging influence’ of Packer.

In his closing submissions Adam Bell SC said that Crown, Packer and his private company CPH were all ‘unsuitable’ to be associated with the venture.

Mr Bell said Packer, who quit his executive roles with Crown in November 2018, still held extraordinary influence over the company in which he owned 36 per cent. 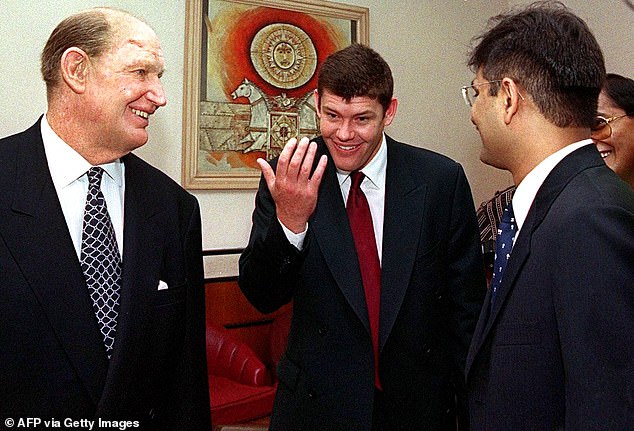 James Packer’s father Kerry had long wanted to run a casino in Sydney but was denied the opportunity. Packer junior wants to create a lasting legacy in his hometown 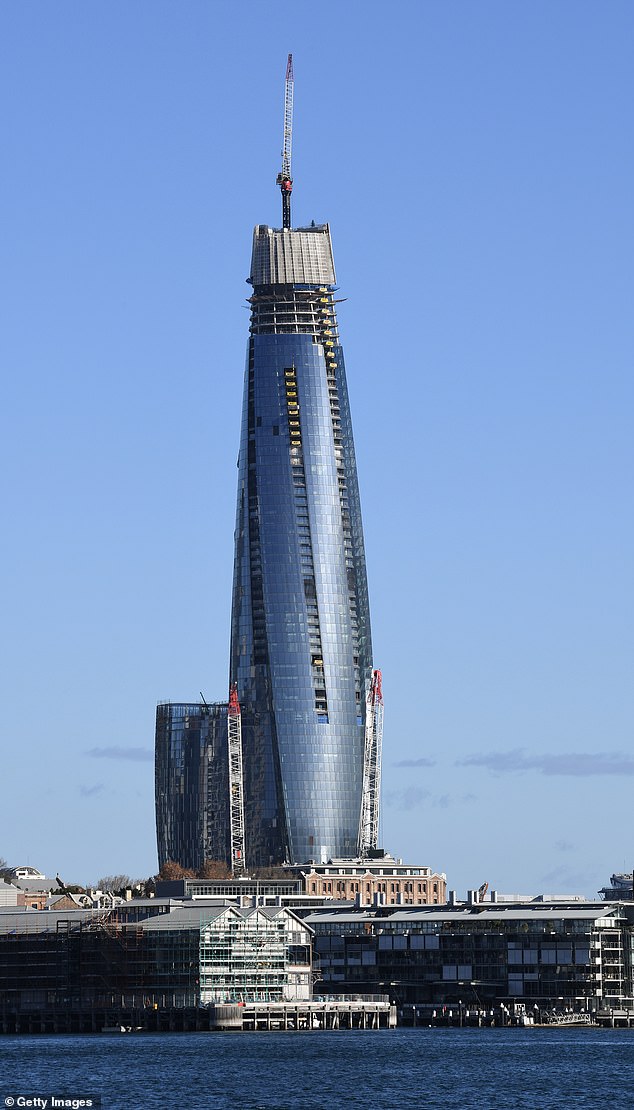 Crown Sydney (pictured) was originally estimated to cost $1billion. That has now blown out to at least $2.2billion

The gaming authority is investigating how Crown, which operates casinos in Melbourne and Perth, failed to prevent money laundering at its venues and its partnerships with figures linked to organised crime.

It is also looking at how 19 Crown staff in China were arrested – and 16 jailed – in 2016 and if the sale of Crown shares by CPH to Hong Kong-based Melco Resorts might have violated its NSW licence.

Melco’s Lawrence Ho has been previously cleared as a suitable person to be associated with the Sydney casino but his late father Stanley Ho was linked to organised crime.

Packer has conceded an angry email he sent to a Melbourne businessman when a deal to privatise Crown fell through was ‘shameful’ and ‘disgraceful’ but said that behaviour was due to his bipolar disorder.

Commissioner Paddy Bergin is due to report on February 1, while the resort is set to welcome its first visitors on December 14. Premier Gladys Berejiklian has said she may delay Crown opening its doors.

Any such decision could prove costly for taxpayers – Crown has projected the Sydney casino would pay at least $1billion in gaming taxes in its first 15 years.

Packer’s big gamble at Barangaroo may be looking increasingly risky, but critics say Crown Sydney had unfairly had the cards stacked in its favour from the start. 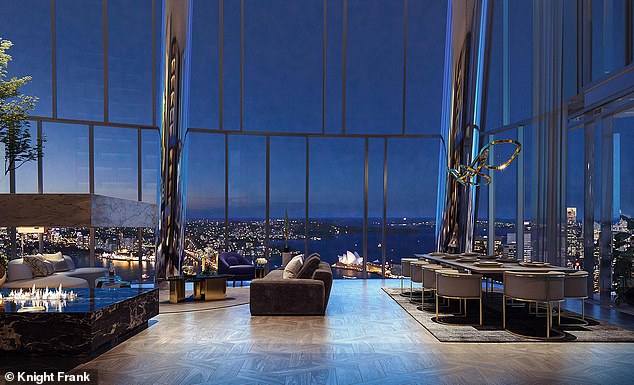 The space Packer purchased in Crown Sydney was originally planned to have six apartments which have been been merged into one giant penthouse. Pictured is an artist’s impression 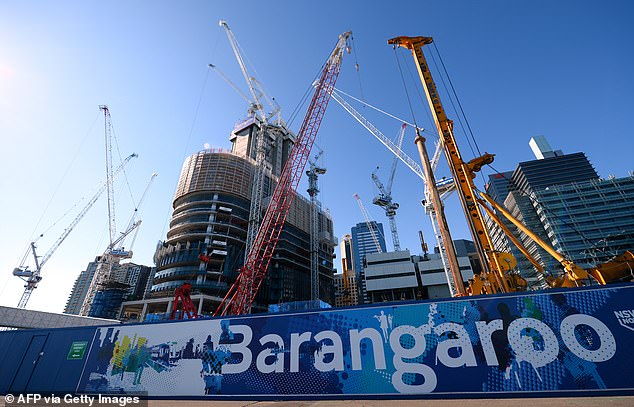 James Packer has said he wants Crown Sydney to stand alongside the Sydney Habour Bridge and Opera House as icons of Australia’s biggest city. Construction of the project is pictured

The 53-year-old’s stated vision for Barangaroo has always concentrated on the hotel part of his proposal, rather than the high-rollers’ casino, which he said would be necessary to fund the project.

‘We want it to be an iconic building that complements the Harbour Bridge and the Opera House,’ he has said.

Sydney had been home to well-run illegal casinos throughout the 1970s and 1980s and demand for baccarat and blackjack was never going to dissipate but organised crime could not be properly taxed.

As with other so-called vice industries such as prostitution, successive state governments subtly acknowledged the public accepted they existed and moves were made to legalise and regulate the trade.

Late last century Kerry Packer bid for the first Sydney casino licence but lost out to a Showboat-Leighton Properties consortium in December 1994.

A temporary facility known as Sydney Harbour Casino was launched in September 1995 and a permanent structure opened as Star City in November 1997.

Tabcorp had paid $376million for a 12-year licence to operate Star City – later The Star – after a competitive public tender. 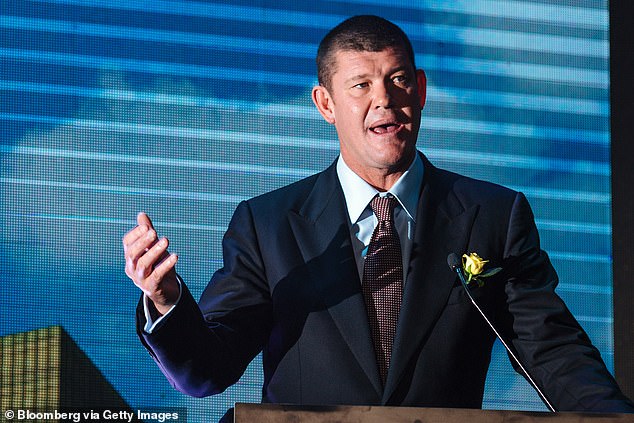 Packer’s stated vision for Barangaroo has always concentrated on the hotel part of his proposal, rather than the high-rollers’ casino, which he said would be necessary to fund the project

That licence was extended by a Labor government in 2007 without going to tender in exchange for $100 million. Echo Entertainment took over The Star’s licence from Tabcorp in 2011.

Packer bought a 10 per cent share of Echo in 2012 and had wanted to use it to build a casino at Barangaroo but when Echo’s board resisted Packer pursued the licence through Crown.

In January 2012 the Coalition state government introduced an ‘unsolicited proposals’ policy for major infrastructure projects which avoided any tendering process and Packer was quick to take advantage of the chance.

The next month he proposed building a $1billion six-star hotel, casino and entertainment complex on harbourside land set aside for open space at Barangaroo Central. 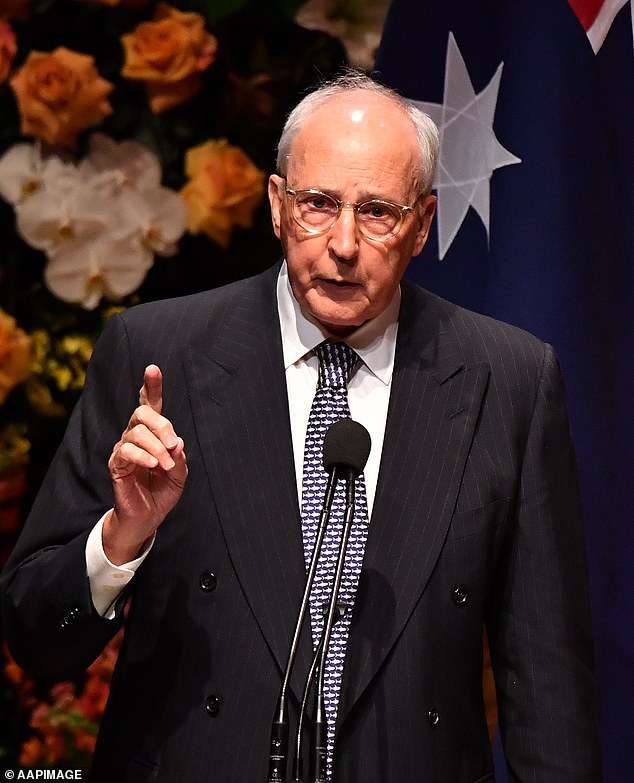 Former prime minister Paul Keating, who had a difficult history with the Packer family, was a major force behind the revitalisation of Barangaroo and did not want a casino – or a hotel – built on land reserved as public space

Keating, who had a difficult history with the Packer family, was a major force behind the revitalisation of Barangaroo and did not want a casino – or a hotel – built on land reserved as public space.

Lend Lease had already won a tender to develop the southern part of the government-owned land at Barangaroo intended to have a hotel – but not a casino.

But it was Packer who picked up the phone and organised the meetings with Keating, O’Farrell and Opposition planning and infrastructure spokesman Luke Foley that eventually resulted in bipartisan political support.

A revised proposal by Packer after wide consultation and compromise would see Crown ask to build its casino with Lend Lease at Barangaroo South. 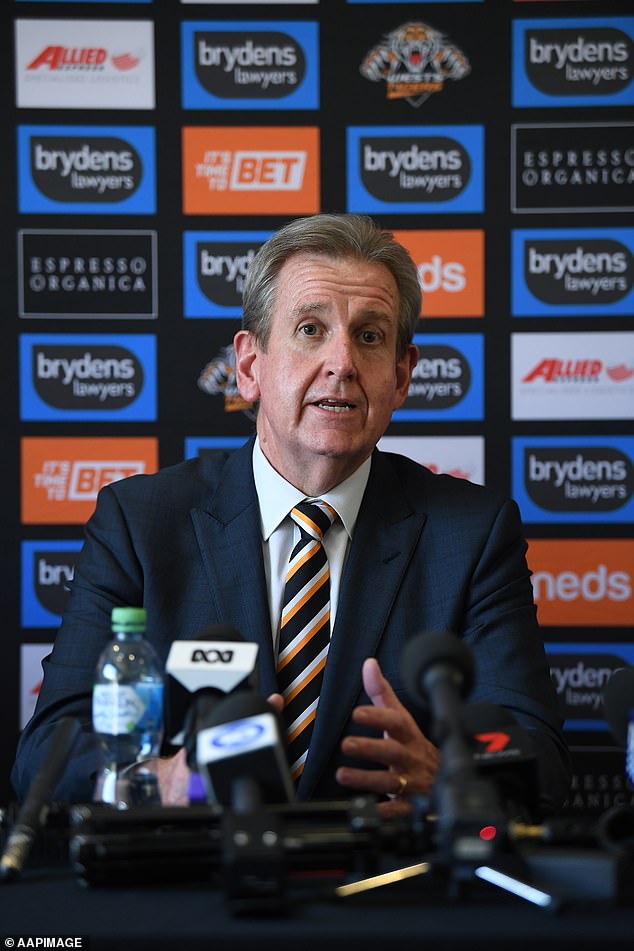 O’Farrell announced in October 2012 that Cabinet had singed off on the initial assessment of Packer’s proposal and the government would begin detailed negotiations with Crown.

At the time O’Farrell addressed concerns other potential operators were being prevented from competing for the state’s second casino licence.

‘No one else has come near us over 18 months,’ he said. ‘I’m not prepared to deal in hypotheticals.

‘We didn’t have plans for a six-star world-class integrated resort hotel at Barangaroo with VIP-only gaming facility.’

O’Farrell said he doubted another casino would be approved in Sydney if Crown was built.

Packer said he was ‘incredibly grateful’ to both sides of parliament for their backing, which he insisted had not come about due to his personal influence. 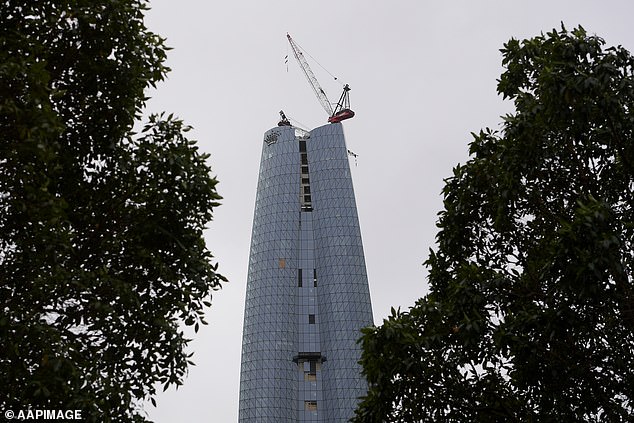 Packer wrote in an open letter to Sydneysiders in November 2012 that he just wanted to build the world’s best six-star hotel resort. ‘For a hotel resort in Sydney to be a landmark building that will attract millions of visitors, it must be on Sydney Harbour,’ he said

‘It’s not lobbying, it’s the strength of a really good idea,’ he said.

‘I think, frankly, if there was a tender it would be very hard to see how we wouldn’t have won.”

‘Some commentators have raised the process we are undertaking to progress our proposal,’ he said in November 2012.

‘The NSW unsolicited proposal process exists to allow any organisation with unique ideas to make a submission to the government.

‘We have followed that process to the letter and, despite reaching stage two, there is a long way to go.’

Even Keating welcomed the deal when Packer joined with Lend Lease developing the southern end of the Barangaroo site.

Packer wrote in an open letter to Sydneysiders in November 2012 that he just wanted to build the world’s best six-star hotel resort.

‘For a hotel resort in Sydney to be a landmark building that will attract millions of visitors, it must be on Sydney Harbour,’ he said.

‘Barangaroo is the only waterfront and harbourside location in the Sydney CBD that will accommodate such a development.

‘We were wrong to have initially designated our proposal on Barangaroo Central and we were rightly admonished by the former prime minister Paul Keating and the state’s political leaders.

‘We listened, took the community’s concerns on board and worked hard to strike an agreement with Lend Lease to move the hotel resort to Barangaroo South, where it will reside totally on their commercial site and not on public land.’

O’Farrell announced the Crown proposal would move to stage three in July 2013 after a recommendation from an independent steering committee.

The government was to receive a $100million upfront fee for the casino licence from Crown, despite the same steering committee’s economic adviser recommending taking $250million with alternative tax arrangements as a better deal.

Approval for the casino licence and a building at Barangaroo was announced in November 2013 but Packer was frustrated by delays in starting the project due to government planning laws.

The Planning Assessment Commission gave the go-ahead in June 2016, subject to conditions including that the building had adequate public space and access. 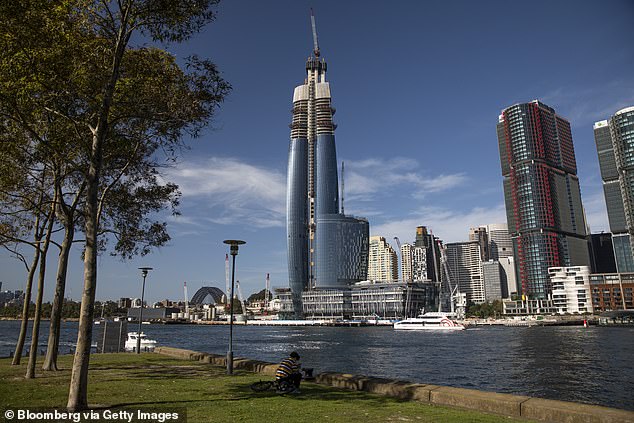 While the casino is not allowed to offer poker machines, experts on gambling – and those who know Sydney – say the operator will fight for that licence in coming years

Works eventually commenced in October 2016, with the structure topping-out in March this year. It is estimated construction has cost $2.2billion.

Further challenges beyond Commissioner Bergin’s inquiry are on the horizon. The casino had intended to target big-spending Chinese gamblers but foreign high-rollers in Sydney are now thin on the ground.

While the casino is not allowed to offer poker machines, experts on gambling – and those who know Sydney – say the operator will fight for that licence in coming years.

If Packer’s gamble does not pay off he will have another thing in common with his late father, but on a much greater scale and in public.

In the late 1990s Kerry Packer quietly walked into a London casino, played £15million across four roulette tables in one session and lost.